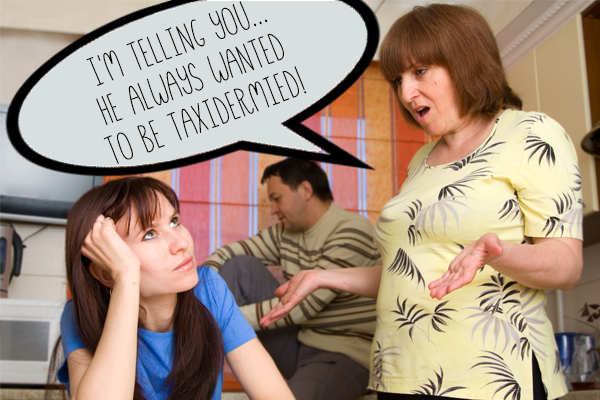 This won’t come as a shock to anyone, but funeral arrangements can be extremely hard on grieving family members. Trust me, the number of arguments and battles I have seen waged over last minute funeral arrangements is not small. Many of these arguments involve differences of opinion over what arrangements should and should not be made for someone who has died. While the deceased’s children feel strongly that their father would have wanted cremation, Aunt Martha insists that he always wanted to be taxidermied and kept at the kitchen table for perpetuity.

Ok, things usually aren’t that bad, but you get the idea.

So, what should you do when a death suddenly turns into a battleground over what should be done with the body?

Do Some Pre-Planning – Here at Elemental, we stress how important it is to discuss your final wishes with your family, and put them in writing. That way, there is no guesswork – all of the information is right there, in black and white. You can take it one step further and actually pre-arrange your funeral. Many people don’t want to have these discussions because they feel they are a bit morbid and uncomfortable. Trust us…it’s better to have the uncomfortable conversation while dad is still alive, rather than take the chance of an all-out family brawl.

Find Out Who Has The Right To Make Decisions – If the person who has died hasn’t left any written instruction on what they wanted for their funeral, it’s time to find out exactly who has the legal right to make decisions on their behalf. States are very clear on who has the right to control the remains of the deceased. For example, in Washington State, RCW 68.50.160 is where to look, but here’s the descending order in a nutshell:

While everyone in the family may not agree on what should be done with a deceased loved one’s remains, states make sure that there is a clear call on who gets to make the final decision.

Take The Time To Communicate – For the sake of keeping the peace between family and friends during a very difficult time, it’s probably best not to immediately make unilateral decisions that isolate people. Remember, even though Aunt Martha’s taxidermy plan sounds crazy, she believes that it is the right decision for a reason. So take the time to listen and answer questions. In this instance, explaining to Aunt Martha why this is a bad idea could involve discussing cost and maintenance. Or the less than ideal appearance. Calm conversations, while hard during such an emotional time, can go a long way toward keeping the peace and coming to a consensus. If Martha is unrelenting, you could let her know that it isn’t legal, but where’s the sport in using that deal killer?

Give Everyone Room to Grieve – Sometimes grief makes people do crazy things. It’s an extremely emotional time, and people don’t always behave as they normally would while they are upset. Make sure that everyone has the room they need to grieve in their own way, and that their pain is acknowledged. Sometime people will act out if they feel they are being pushed to the side, so be as inclusive as possible.

Remember, Final Plans Are A Tribute To the Deceased – Even if you wouldn’t want it, remember…it’s not your funeral. It can be very hard to not imprint your own wants for your funeral on those of the deceased, so try to recognize that not everyone wants the same thing. If there is ample evidence that yes, dad really did want to be taxidermied, and there’s no good reason not to do it (such as state regulations), then it’s best to find a creative way to honor the spirit of his wishes.