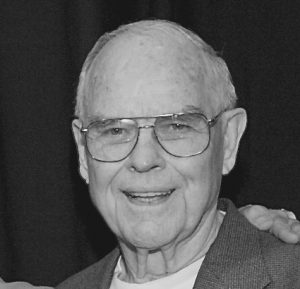 Donald (“Don”) Willitt Johnson passed away peacefully in Kirkland, Washington on August 24, 2016, at the age of 90. He was preceded in death by his former wives Elizabeth (Libby) Rebecca Myers Munroe Johnson and Helen Mann, and his son Brian David Johnson. He is survived by his sons Michael and Grant, his daughter Monica, his granddaughter Gemma, and his grandsons Elijah, Connor and Ethan Johnson. Don was born on December 13, 1925 in Oklahoma City, Oklahoma, to Vella Vickers Johnson and Arthur Willitt Johnson. He had three siblings, an elder brother Arthur Roy, an elder sister Ruth Eloise, and a younger brother Glenn Buick. He graduated from high school in Stillwater, Oklahoma in 1943, where he was on the football team, played trumpet and French horn in band and orchestra, and was a lifeguard at the Crystal Plunge swimming pool. He also was a member of the National Honors Society and achieved the rank of Eagle Scout in Troop 17 of the Boy Scouts of America.

After graduation, when still only 17, Don lied about his age to enlist in the Merchant Marines, where he served two and a half years sailing merchant ships and troop transports in the Atlantic during World War II. In 1946 he enlisted in the U.S. Army and spent 13 months in Korea with the 754th Tank Battalion, the 5858th Armored Reconnaissance Battalion, and 7th Infantry Division Headquarters in Seoul. After his military service, Don graduated from Oklahoma State University, and went on to law school at the University of Michigan, where he graduated with his Juris Doctorate in 1952. There he met Libby Myers of South Bend, Indiana, whom he married in 1952. They had four children, Brian David (1959), Michael Scott (1960), Grant Matthew (1962) and Monica Lee (1964).

After Libby passed away in 1996, Don relocated to Houston, Texas, and married Helen Mann. They lived in Houston, Texas, Spokane, Washington and San Diego, California, and travelled extensively throughout the U.S., Canada, Europe and the Mediterranean for the five years they were married. Don moved to the Seattle, Washington area in October 2002, where he lived the remainder of his life.

A service will be held on Saturday, September 3rd, 2016 at 10:30 a.m. at Fairwinds – Redmond, 9988 Avondale Road, Redmond, WA for friends and family to remember Don and celebrate his life.