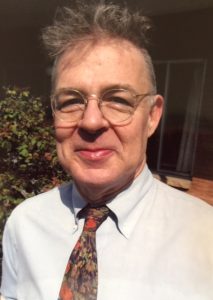 With sadness, we announce the passing of our son, brother, and uncle, Bob, who died of natural causes at the age of 66. Bob, who in later years called himself by his full name, Robert, suffered from mental illness all of his adult life with a diagnosis of schizophrenia. Nevertheless, he lived independently for years in the Columbia City neighborhood where he was well known as a friendly, talkative, somewhat naive and innocent, sometimes annoying, but always gentle person. One friend described him as a person “without a mean bone.” He was a great Mariner’s fan as well as a Husky football fan. Bob had an artistic eye, loved music, and although he lived on a modest income, he became an avid watch and clock collector in later life. We take solace knowing Bob died quickly, and we smile, knowing he died with a watch in his hand.

Bob was born to Edwin and Virginia (Deedy) Krebs, and grew up in the Shoreline area, graduating from Shorecrest High School in 1968. Before developing schizophrenia, Bob was quite musical on guitar, and he retained a life-long love of music. When young, he was very strong and athletic, participating in state high school gymnastics and track meets.