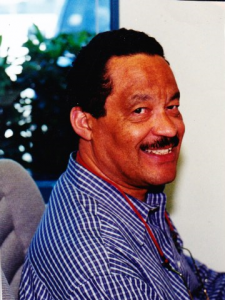 Bill was called to serve his country in 1961. He enlisted in the United States Air Force where he trained in the field of electronics. He wanted to be a pilot; however, his height would not allow it.  His height was an advantage in his love of basketball.  His military career afforded him an opportunity to continue to play. He was Honorably Discharged on October 6, 1965.

Bill spent the majority of his career in the computer industry, beginning with IBM as a Field Engineer, in the mid 60â€™s, moving to Chicago as an Instructor in 1977.  He moved back to Seattle in 1983 and worked for Wang Laboratories, Decision Data Services, and ICS Support. Among his other talents, Bill possessed an entrepreneurial spirit trying a variety of ventures. He and his wife Carol opened “Bill’s Bodacious BBQ” in Renton, WA in 1995 until 2008.  He loved the fellowship that was formed during the restaurant years.

Bill had a deep love for music. He played the clarinet, in high school, and piano and loved to sing.  He was in the singing group The Emanonâ€™s.  He loved Karaoke singing Johnny Mathis love songs to his wife Carol.

Bill lived a very full and happy life doing what he wanted to do like traveling in their motorhome and fishing Ocean Shores or Sekiu, Washington. After setting up camp, he liked to â€œdrink a cup of coffee and kick rocksâ€. As a family man his greatest joy was making his wife Carol happy. He introduced the love of the outdoors to his children which included visits to the ocean, fishing, and camping. He appreciated life conversations with his children and was an excellent listener, always providing good words of advice.

He had a very contagious smile.  He wouldnâ€™t want people to be sad, but to smile when they think of him. He had an incredible sense of humor, and a very positive outlook on life. He seemed to be a source of comic relief even during the most challenging of times.