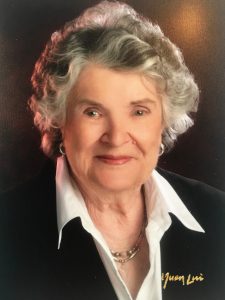 Ruth Lucille Hill died quietly on Thanksgiving Day.  She was 97 years old.  Born July 3, 1919 – the only child of Fred and Hazel Brinkman – Ruth grew up riding horses, swimming and playing tennis in California’s sunny Santa Clara Valley.  After high school, Ruth attended San Jose State University where she met her husband, Robert Wilmer Hill. The two worked for the City of San Jose and married in 1942. They had three children:  Craig Everett, Jeffrey Robert, and Kimberly Ruth.  In 1957, the Hill family moved from Los Gatos, California, to Mercer Island and then later to Tam O’Shanter where Ruth, Bob and the rest of the family became avid golfers.  Ruth was famous for “never” losing a ball.  Bob and Ruth retired to an apple orchard in Manson, Washington.  When Bob died in 1996 Ruth moved to Providence Point to be closer to family. She was an exceptional cook and pie maker , a gifted seamstress, a sometime painter, and a collector of people.  Always curious and interested in those around her, Ruth made friends wherever she went – the grocery store, coffee shop, riding the bus, or attending classes at the “Communiversity.”  More importantly, Ruth was a beloved mother, grandmother and great-grandmother.  She is survived by her daughter Kimberly (John) Graham and their children, Justin and Kendall; her son Craig (Sandra) Hill and their son, Timothy; and daughter-in-law Debbie, widow of Jeffrey, their children and grandchildren: Trevor (Erika) Hill and son Ford; Zack (Lauren) and their daughters Sienna & Mia; and MacKenzie Hill.