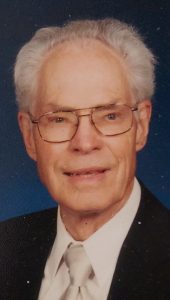 Glory to God, who is able to do far beyond all that we could ask or imagine by his power at work within us; glory to him in the church and in Christ Jesus for all generations, forever and always. Amen.  Ephesians 3:21

On December 18, 1927, in the middle of a blizzard in Craigmyle, Alberta, Kenneth George Branton was born to Stanley Francis Branton and Edith Eleanor Forster Branton. He was the third-born son of 4 boys and a girl. At age 5 his family moved to a farm in Armstrong, B.C., where Kenneth grew up frequently walking around with a book in hand and a cat on his shoulders. Kenneth dreamed of becoming a missionary doctor and applied himself in school in subjects ranging from biology to history. He attended Northwest Baptist Bible College where he received a Bachelor’s of Theology. During that time he met Doreen Hamilton, who would become his wife in 1952. He completed another B.A. in History from the University of British Columbia, a Master of Divinity and a Doctorate in Sacred Theology from Golden Gate Baptist Theological Seminary.

Kenneth served as a Southern Baptist pastor of churches in British Columbia, California, and Washington. During that time he also taught college and seminary coursework. In middle age, Ken and Doreen went as missionaries to Zimbabwe and Zambia, teaching at Baptist seminaries in addition to working with local churches and the Baptist Convention of Zimbabwe. Ken also served as Zimbabwe Mission Administrator for 2 years. In retirement he taught again at the seminary in Zimbabwe, at The Canadian Southern Baptist Seminary in Cochrane, Alberta, and provided interim pastoral support to First Baptist Church of Beverly Park and Arabic Baptist Church of Calgary.

Ken would list many highlights in his life. He delighted in being married to Doreen and dad to Heather. He welcomed many international students into his home and his life, with a particular closeness to Mohammad Aminpour and later his wife, Zohreh Zandi, and family. He loved playing with children. He celebrated relationships with many Vietnamese families sponsored through his church in Beverly Park, and was especially honored to be adopted as “father” by Loc Tram and Hong Le. And he was thrilled to become a missionary in Africa, a lifelong dream.

Kenneth was an enjoyable person to be around. He was known for his humor, especially puns, and liked to play practical jokes. Even when he was unable to speak near the end of his life, he was quick with a smile. While in many ways an introvert, he thrived being among people. His faith was genuine, lived out through loving and supporting others, seeing the best in people. He frequently shared the good news of his personal experience of salvation with an assurance that it mattered.