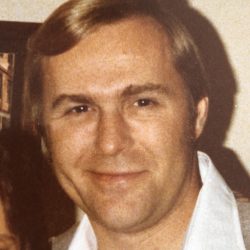 David ‘Dave’ Cunningham passed away on 10/30/2019 at the University of Washington (UW) Hospital in Seattle.  Dave had celebrated his 80th birthday in March.  Born In Minneapolis Minnesota, he spent most of his youth in Moorhead  MN where he enjoyed weekends of fishing at his parents lake cabin at Big Cormorant Lake.  He and his only brother Richard Cunningham, who preceded Dave in death, enjoyed many family memories from the lake.   Dave loved fishing and taught his kids to fish at an early age.  Fishing remained a favorite family activity throughout the years.  Dave also joined the National Guard after High School where he first developed his love of airplanes which he enjoyed studying and collecting (models) all of his life.

After marrying Shirley Danielson, in 1958, and having 2 kids, Dave graduated from Moorhead State in 1962 with a degree in Business Administration. He moved his family out west in 1963 where he landed a sales job with International Harvester in Lewiston ID. While in Lewiston Dave was very active in the community.  He eventually went to work for Washington Water Power (now Avista) and was an active member of the Lewiston Jaycees and supported 4-H.  In 1970, his marketing  job with WWP took him him to Spokane, WA.   .

In Spokane, Dave continued to be active in the community supporting Junior Achievement and United Way while working in the Marketing Department.  Dave was always very community minded and supportive of many community events.  In 1974 WWP offered Dave the important responsibility to manage the Energy Pavilion for the World Exposition.  This was a very big assignment and Dave hosted the Up with People entertainers as entertainers at his Expo Energy Paviliion.  After Expo 74, Dave worked as a lobbyist for WWP in both Boise and Olympia where he was .  As a lobbyist, he was well liked for his artful negotiations with both sides.
In 1981 Dave, a passenger in a car, suffered injuries from an accident that left him paralyzed below the neck.  He later moved from Spokane, married Rebecca Bogard and settled in Magnolia where he lived the remainder of his life.  After divorcing, Dave lived had multiple live in caregivers.  Almost all of his caregivers have remained lifelong friends.  All who worked for Dave enjoyed the laughs and entertainment that came with the job.   His final caregiver from Fiji, Litia Cakacaka, shared his house, adventures, and a special bond with Dave for 18 years.  Dave was always full of facts and figures and everyone learned something from him when they weren’t laughing from his uncanny sense of humor..

Dave was preceded in death by his brother Richard Cunningham and his mother and father Eileen Cederholm Cunningham and Earl Cunningham.  Dave is survived by two children DeVon Cunningham and Danny Cunningham.  Dave has three grandchildren and five great-grandchildren in Washington State.  He has one niece Gail Cunningham Zabe and one cousin Susan Luce who has one daughter Catherine ‘Kitty” Barstad.   Dave was an avid support of the University of Washington Spinal Cord Program.  Donations in Dave’s name can be made to the UW Mark Guthrie Doctor of Physical Therapy Graduate (DPT) Education Scholarship Fund.   His memorial service will be held in Seattle, Saturday, November 16 at 1:00 PM at the  Magnolia Lutheran Church (2414 31st Ave West).  All who knew him and would like to honor his memory are welcome to attend.