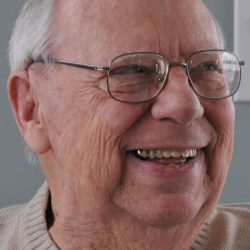 David Weidner Lantz passed away August 19, 2019 on Bainbridge Island from lung cancer.  He was born on February 11, 1927 in Orlando Florida. While growing up, David also lived in Reading PA, Denver CO and finally Tacoma WA. Three different high schools in so many years was rough going.  His father Tom Lantz was a recreational specialist, and found a city in Tacoma WA that was open to his plans of integrated swimming pools for all kids, regardless of race. Dave graduated from Stadium High in Tacoma in 1945.

After serving his country in the Korean War, David went on to pledge Alpha Tau Omega and major in business at the University of Washington. By the time he graduated in 1951 he’d created many lifetime friendships.

He had a busy life in the 50’s! Married Joyce Kuniholm Lantz in 1952 and their first child, Mark David, arrived in 1953. Moving from Portland Oregon to Seattle, he started a food brokerage business with a fraternity brother, Gordon Schramm. About this time, twin boys were born in 1955, Donald Thomas and Dale Frederick. Finally, the youngest boy Kurt Miller in 1958. “Four boys in five years – try that sometime!” Joyce, whom David was married to for over 50 years, would proclaim.

Dave, as everybody knew him, was a great father and provider for his family. An astute businessman, he fostered many long term business relations, thinking more in terms of “friend” instead of client or customer.

As a hobbyist Dave explored electronics, inspired by next door neighbor Dr. K.W. Edmark the inventor of the (DC) heart defibrillator. Dave also enjoyed photography and outfitted a darkroom in the basement of the family home.  In the fall he loved to take his boys to eastern Washington and pheasant hunt in the fields around Quincy. The family bird-dog, an english pointer, dutifully pointed to hidden pheasants followed by blasts of shotguns and swearing.

Dave adored classical symphonic music and the entire operatic canon. The family stereo, capable of concert level decibels, boomed with Bizet, Bethoveen and other greats from the last three centuries.

After all the boys graduated from high school and moved out, Dave and Joyce sold their home in Seattle and moved to Bainbridge Island. It was there that Dave was bitten by the bug that would fill many of his retirement days: fishing. At first, he trolled right out his backdoor on Bainbridge from a small aluminum boat for sea-run cutthroat trout. In 1981 he fell in love with fly fishing and in that pursuit, he discovered his true passion. Eastern Washington was explored again, but this time the quarry were rainbow trout instead of pheasant. The whole family took up the sport with great enthusiasm.

In the mid-80’s, Dave retired early to pursue fly fishing, travel with Joyce and friends to Europe and fully enjoy family life. His favorite destinations, though, were all within driving distance where he could share time fishing with his family.  These included the Fall River in central Oregon, Sun Valley ID and western Montana.

In a span of 12 years, three of the sons married and by 1990 five grandchildren were added to the family.

As Dave and Joyce stayed closer to home, now in Issaquah, he became an avid chef and wine aficionado. He still fished with a fly and did so well into his late years. Dave’s best memories of shared time with Joyce might have been visiting the Oregon coast. Most likely their favorite road trip in the region. They seemed to come back refreshed and renewed.

David W. Lantz will be fondly remembered by all who encountered his charm. People seemed to immediately take to him and enquire about Dave even if they hadn’t seen him for years. Every fly fishing shop and fishing guide that Dave frequented will remember him for many years on. He had an enduring quality and a friendly sparkle in his eyes.

Dave is survived by three of his sons; Dale, Don and Kurt Lantz. He is survived by his five grandchildren and three great-granddaughters. All will miss Dave so very much.