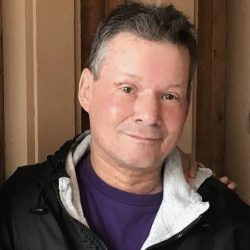 Frank X. Clapsaddle passed away on October 29th after a valiant 14-year battle with Lupus and Scleroderma. He was born in Munich Germany on April 21, 1959, to John and Ingrid Clapsaddle. He served as a firefighter in the US Air Force and later made his career in construction as a craftsman of finish carpentry.

Those honored to have known Frank will remember him as the kid who brought home every stray dog and the adult who never hesitated to help a stranger. To be loved by Frank was to be truly known and fully accepted. He sought out the best in every day and the beauty of every person, and never hesitated to share both with all he met.

Frank married the love of his life, Mercy De Jose on December 27, 2011, and they made their home in Federal Way, WA. This marriage also gifted him with children and grandchildren he loved as his own.

He was greeted in Heaven by his parents who preceded him and is survived by his wife Mercy; sisters Suzzanne Fairbank and Marika Gard; son, Dustin Clapsaddle; his gifted family through marriage, Jumer De Jose, Krista Green, Judith De Jose; grandchildren Jaden and Daryl; as well as nieces and nephews Nichole, Ryan, Tim, Nicole, Alex, and Alaina.

A celebration of life will be held in December.

The family extends their greatest thanks to Providence Hospice of Seattle and asks any gifts be forwarded to them or that you plant something beautiful in Frank’s memory.