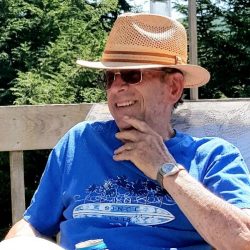 Wilfred Edward Schmidt was born in Hirschville, North Dakota, the 12th of 14 children born to Henry and Elizabeth Schmidt.  He is survived by wife, Dolores (Dee), and children Mark, Karlen, Deb and Dave; granddaughters Shelby and Morgan; and great granddaughter, June, who brought a smile to his face ‘til the end.  Also survived by his brother Leo (Shirley), numerous nieces and nephews and other extended family. He was known by most as Fred, as Smitty to career friends, and as Poppy since becoming a grandfather.

In the early 30s, when Fred was a young boy, the family moved west to the Yakima Valley where he spent the rest of his youth.  He joined the Coast Guard at age 18, and his first assignment as a diesel mechanic was in Adak, Alaska.  The flights in and out of Adak created only a lifelong tolerance for flying.  Not one of his favorite things.

Later, when based in The Dalles, Oregon, he met Dee, and they were married in 1952.  There were several moves over the years, courtesy of the Coast Guard, and while based in Seattle he was assigned to the Umatilla lightship off Neah Bay, the most northwest point of the state of Washington.  He retired as a Chief Petty officer after 20 years of service. Soon after, he was hired by the Washington State Ferry System as a Chief Bosun Mate, working primarily on the Yakima vessel on the Seattle-Bremerton run. After 20 years, he retired for a second time.

Then Fred and Dee hit the road for 17 winters, travelling south to Mexico where they enjoyed fishing, card games, new and old friends.  Back home in Washington they enjoyed living near the beach where crabs and clams were plentiful.

Dad was such a kind man and always lent a hand (not so much his tools). He could fix most anything, tended a garden until it got to be more a bother in the last few years, made great pico de gallo and clam chowder. Independent and healthy enough to do most things he chose to do, he didn’t like to think he needed any help in later years.  However, we did convince him to stop going on the roof at about age 85.

Unfortunately, shortly after his 88th birthday, he had a stroke which caused both cognitive and visual impairment. He could no longer drive, read or work with tools, and he didn’t always know where he was.  As drastically as that curtailed his independence, he never complained about that or other health challenges the past couple of years.

Poppy, you lived well, and will always be an inspiration to us all.  We love you.  Watch over us.