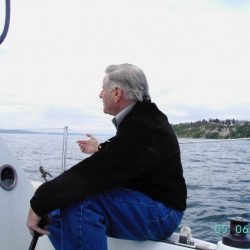 Glenn Andrew Lutzenhiser, 86, passed away peacefully in the presence of his family in Seattle, Washington.  Born in Polson, Montana to Marguerite (Yates) and Glenn Elmer Lutzenhiser, he was the youngest of four children.

Glenn attended Deer Park High School and served six years in the Air Force, active duty and reservist. He served as a Jazz saxophonist while stationed in Puerto Rico, before graduating from Eastern Washington University with a degree in Music Education.  He would later go on to complete a Master’s Degree from the same institution in Music Composition.

He is preceded in death by his parents, brothers Loren and Kenneth, sister Bonibell, daughter Judith, and grandchildren Cassandra and Bart Andrew.

Glenn is survived by his beloved wife of 56 years, Miep, his sons Bart, Stuart (Melissa), and Trevor (Shelley) and daughter Mika (Tim), as well as many grandchildren.  He is also survived by his two children from a previous marriage, Tobianne and Mark.

Glenn was a passionate Music Educator, teaching for more than 40 years, most of those years spent as the Band Director at Issaquah High School and later serving the district as their District Music Coordinator.  Mr. L’s commitment to the program was legendary – reaching thousands of students, travelling up and down the west coast with them, composing for them and inspiring many future professional musicians.  A decade after his retirement, Glenn returned to teaching as a substitute Music Teacher in Seattle Public Schools. Much beloved by his students, he remained in contact with many for decades after he had conducted them in Band.

He was the founder of the Bellevue Youth Symphony Orchestra and Seabeck Jazz camp, and served on the boards for the Bellevue Opera and East Shore Unitarian Church.  Ever working and creating new opportunities for himself and others, he spent his later years writing fiction, blogging and publishing a monthly newspaper, The Bingo Bugle and Kid’n Around.

Glenn was a conscientious father, a loving and devoted husband, and a wonderful teacher.  He believed that students (and people in general) would rise or lower themselves to the level of expectation you have for them.  He set his expectations high and brought that to everything he did. He will be greatly missed.

A memorial celebration of Glenn’s life will be held on Saturday, March 23rd  at 2 pm at the Eastside Baha’i Center, 16007 NE 8th St Bellevue, WA 98008.  All are welcome.  No flowers or gifts, please.  If so moved, remembrances can be made to Music Aid Northwest or other charity of your choice.