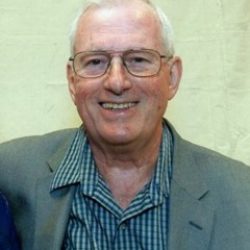 James (Jim) Rex Robinson, of Monroe Washington, passed away from COVID-19 at Evergreen Hospital in Kirkland Washington on January 23, 2021.  Our family was able to share stories and pray together through video conferencing in the days leading up to his passing.  One of the last things Dad said was, ‘God is calling me.’ While we mourn his passing, we celebrate his life, and are comforted in knowing that his soul has returned to our Lord.

Jim leaves behind his loving wife, Pat, of 65 years, their four children, nine grandchildren and a great grandson.  Growing up, we were convinced that there was nothing Dad could not accomplish.  In one of our family homes, Dad completely rebuilt the basement on his own, modifying the plumbing and electricity.  He built the family television used for many years.  He restored his parents’ 1955 Ford F150 in the 1990s, after it had been in disrepair for many years.  He was athletic, and coached his sons during their early years.  He was the consummate engineer, and helped his children with their calculus many years after he had taken these classes.  He always was called upon for leadership roles in the churches he attended.  During his retirement years, Jim researched the Robinson family tree, which included reaching out to distant relatives and sharing stories.  His life was a full one of giving and service.  He is remembered by family and friends as a caring, kind and devoted man, with a clever, mischievous sense of humor.

Jim was born in Munford, Alabama on April 30, 1936 to Leonard and Anna Robinson.  He was a precocious child whose activities resulted in many amusing anecdotes that entertained his children and grandchildren.  Jim was salutatorian (Munford High Class of ‘54) and played quarterback for the Munford Lions.  In the summer of 1955, he married Patricia Steely, his high school sweetheart.  Over the years, we heard many times, from each of our parents separately that they were grateful to have chosen so wisely.  Jim joined the Navy after high school.  He and Pat were stationed at Key West Florida, and Jim was assigned to the submarine USS Sea Cat (SS-399).  Tom, their first son, was born in Key West.

After leaving the Navy, Jim became the first in his family to attend college.  He graduated from Auburn University in 1962, with a Bachelor’s of Science degree in Electrical Engineering, completing his studies while working at a cotton mill to support his family.  Terry, their second son, was born in Opelika during this period.

With his college degree in hand, Jim and his young family moved from Alabama to New London, Connecticut, where Jim worked as an engineer on submarines for Vitro Corporation of America.   This was the first of many moves for Jim, Pat and their family.  They often shared that they felt fortunate to live throughout the country.  Their third son, Tim, was born in New London.

While the race to the moon was capturing the country’s imagination, Jim and his family moved to Huntsville AL, where he joined Boeing in 1965, to work on the Saturn V rocket program.  Their fourth child and only daughter, Tracey, was born in Huntsville.  Our entire family has fond memories of boating and going through the locks of the Tennessee River during our time in Huntsville.

As the space program slowed, Jim returned to Vitro at the Puget Sound Naval Shipyard in 1970, moving his family across the country to Port Orchard, Washington.  Puget Sound, Mount Rainer, and Hurricane Ridge became the Robinson family playground.  In 1974, Jim became the manager of the Vitro office at the Portsmouth Naval Shipyard in Kittery, Maine.  The family moved across country again, this time settling in Durham, NH.  All four children graduated from Oyster River High School, and all four completed their undergraduate degrees, with the boys attending the University of New Hampshire, and Tracey attending Drexel University in Pennsylvania.  During this time, Pat worked at UNH so that the family could afford for the boys to be at the university.  Of all the many things Jim and Pat accomplished, this was the one Jim was most proud of.  And even though they had left the South, Jim and Pat remained devoted to their families in Alabama.  The children have fond memories of annual cross-country trips through national parks. No matter where they were living, each year Jim and Pat loaded up the LTD Country Squire or Dodge Van with their kids and drove back home to Alabama.

In 1988, Jim transferred to the Vitro office at the Groton Naval Shipyard, and he and Pat settled in Salem, CT.  Knowing Jim and Pat’s fondness for the South, Vitro offered to move Jim to Florida in 1996, to head up an office at the Kennedy Space Center.  So, on their own now, Jim and Pat moved to Cocoa FL, where Jim retired in 1999.  But their traveling adventures continued.  By this time, their children had settled in three of the four corners of the US.  So, selling much of their possessions, they purchased an RV and started a 5-year journey crisscrossing the country, exploring every corner and developing quite a genealogical record.  In doing so, Jim and Pat developed lasting relationships with their grandchildren, inviting each of the nine to accompany them on a cross-country adventure, with leisurely stops at historic, and child-friendly sites.

Jim is survived by his wife of 65 years, Pat Robinson.  He is also survived by his four children; Tom (and June) Robinson, Terry (and Cathy) Robinson/DePorte, Tim (and Ellen) Robinson/Moss Robinson, and Tracey (and David) Gerhardt.  He is survived by 9 grandchildren; Philip, Joshua (and Ashley), Mathew (and Julianna), James, Nathan, Jesse, Sam, Anna, and Rachel.  Jim was also fortunate and excited to get to know his great grandson, Owen, born to Mathew and Julianna in 2017.  Jim had a loving friendship with his siblings and is survived by his sister, Margie (and Sorrel) Wesson.  He was preceded in death by his brother Jack (d: 1997) and sister-in-law Louise (d: 2016).

A memorial event will be planned in the future, and at a time when his friends and family can gather together to celebrate Jim’s life.  In lieu of flowers, please offer a donation to one of two places: (1) The Ironaton United Methodist Church; c/o Janice Ford; 3880 Ironaton Road, Talladega, AL 35160, or (2) Bethlehem United Methodist Church; Attn: Cemetery Treasurer, PO Box 693, Munford, AL 36268.