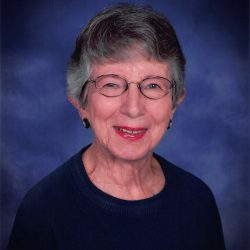 Her celebration of life will be held Sunday, July 29 at 2 p.m. at the Seattle First United Methodist Church.

Jean Ferguson, who inspired and helped found a free breakfast that fed about 300 homeless people every Sunday at First United Methodist Church in Seattle, died Tuesday, June 5, at her home in Shoreline. As she passed, her son-in-law held her hand and sang “Jesus Loves Me” to her.

Her celebration of life will be held Sunday, July 29 at 2 p.m. at the Seattle First United Methodist Church.

She was born Dec. 27, 1937, in Wenatchee. She married Clyde Ferguson in 1956 and the couple had three sons: Mike (Susan Barnes), Marc (Stan Harrison) and Patrick (Brian Pratt). Also surviving her are her sister-in-law, Patsy Swartz, four grandchildren: Adam and Joel Ferguson, Lucas and Eleanor Ferguson, and nephew Joe Swartz.

As a girl, Jean gave Queen Elizabeth a bouquet of flowers when the young monarch visited Canada. Jean received a pat on the head in return.

As the wife and mother of an Air Force family, Jean’s travels took her across the country, including Massachusetts, Florida, Montana, Hawaii, New Jersey, California and Seattle. She was a longtime church secretary, including at First United Methodist Church and at Community Presbyterian Church in Vacaville, Calif. Jean also worked for a time coordinating scholarly articles written by world-class AIDS researchers for the Journal of Infectious Diseases.

Social justice was at the heart of Jean’s faith. While this white woman lived in still-segregated Florida during the early 1960s, she took her water from drinking fountains marked “colored,” offending some and encouraging others.

More than 20 years ago, church members started Shared Breakfast one Sunday each month at First United Methodist Church to feed a few dozen people experiencing homelessness. That ministry, paid for by faithful church members and generous businesses, became a three-seating weekly event at the downtown church where volunteers treat diners as guests and where people can tell their stories and receive a hug or a blessing in return.

Each Sunday, Jean organized the volunteers, and on many Saturdays she shopped for needed groceries. Her garage became a warehouse to store cereal she found on sale. Shared Breakfast will go on without Jean, a fact that gave her considerable joy and hope.