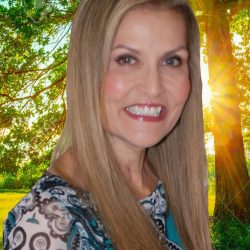 Kim Merrival Schoof passed away peacefully surrounded by her family on March 11, 2018, after a 14-year battle with throat cancer.

Born in Salt Lake City on October 15, 1959, Kim grew up loving the majestic mountains and beauty of Utah where many of her family and Friends still reside.

During her teenage years, she moved with her mother to Seattle where She lived a happy, fulfilling life as a wife, mother, and co-owner of Advertising/media companies along with her husband John Schoof.

Nearly 14 years ago, Kim (a non-smoker) was diagnosed with stage 4 throat cancer and was given a two-year prognosis from the doctors.  After extensive research, Kim decided not to do traditional radiation and chemotherapy, but instead sought out alternative, holistic cancer treatments, even traveling alongside her devoted husband John to non-traditional Cancer clinics in Mexico. Over the years, Kim experienced many long-term remissions and healings with her disease.

With an unrelenting optimism and a powerful faith in God, Kim fought tirelessly to overcome the disease until the final days of her life. In the end, her suffering became intolerable and she decided to be removed off life support and fly into the arms of Jesus. She transitioned into heaven at The University of Washington Medical Center in Seattle, where a dedicated team of doctors and nurses provided first-rate medical care compassion to the very end.

Kim attended Tabernacle Fellowship in Washington State and truly lived a Christ-like example in the way she treated everyone with love and acceptance. She had a caring, compassionate nature and loved praying for others, especially those afflicted or struggling. She always inspired her many doctors and nurses with her amazing will to live, loving disposition, and beautiful countenance.

Kim’s birth father was Peter “Peachie” Merrival of the Oglala Sioux Tribe in Pine Ridge South Dakota, who also died of throat cancer. Kim was always very proud of her Sioux heritage and spoke lovingly of her Ancestors and family members in Pine Ridge, South Dakota.

Services will be held in Seattle, Washington at a date to be determined.

Instead of flowers, it would honor Kim’s memory if you would find someone who is in pain or has cancer, hold their hands and pray with them.