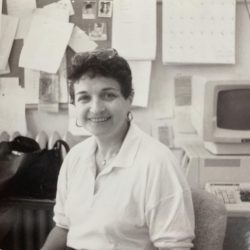 Myrna Kaufman Bearse, age 81, a former editor and reporter for Town Topics, died on January 6, 2020, after a short illness.

Myrna was born in Brooklyn, NY. She graduated from Thomas Jefferson High School at age 16. After a brief marriage, she moved to the West Village in New York City. There, she worked as a journalist for various magazines. She recalled interviewing Joan Rivers, the comedian, for a parenting magazine.

She remarried and moved to Princeton with her young family to a house on Leigh Avenue. She continued to work as a freelance journalist while raising her two daughters, both of whom graduated from Princeton High School. She started reporting for Town Topics in the mid 1980s.

She occupied a front window office in the old Town Topics building looking over Nassau Street. She was a fixture at Borough Council, planning, and other government meetings. And if something interesting happened in Princeton between the 1980s and early 2000s, chances are good that she wrote about it. She served briefly as the paper’s editor when ownership transitioned away from the Stuart family, and also became an investor in the paper through Witherspoon Media Group. She lived in the same house on Leigh Avenue until she left Princeton in the early 2010s to be closer to grandchildren in the Seattle area.

The daughter of the late Max Kaufman and Edna Goldstein Kaufman, she is survived by her daughter, Aurora Bearse, and her husband, Ian Crosby, and their two daughters, Sarah and Lilah. Myrna was sadly predeceased by her other daughter, Miriam Bearse, but Miriam’s wife, Karen Fieland, and their daughter, Ariella, survive her.

The family will be sitting shiva on January 8 & 9, 2020, in Seattle, WA. A memorial service in Princeton is planned for spring 2020. Please contact her daughter via email to express condolences or for information about the memorial service, to myrnamemorial1@gmail.com.

In lieu of flowers, contributions may be made to Friendship Circle of WA https://www.friendshipcirclewa.org/templates/articlecco_cdo/aid/4050553/jewish/Donate.htm or SAVE of Princeton, NJ https://savehomelessanimals.org/donate/