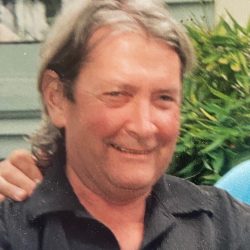 Rich, also known as “R.J.” and “the Prince” was born in Seattle, raised in the shadow of St. Joseph Catholic Church on Capitol Hill, where he served as an altar boy.

He grew up in a loving home with parents Leo and Rina and his three siblings Celine, Vince and Janie.

Rich attended St. Joseph’s School across the street from his home. After graduating from Seattle Preparatory School in 1966, he went on to Seattle University.

During Christmas break of his freshman year, he landed a job at the Bon Marche loading dock in downtown Seattle. And that’s where he remained for 44 years, providing good customer service while watching the girls walk by.

There, Rich also learned the joys of the dumpster dive, beginning a life-long hobby collecting oddities, art deco and beyond. His collection grew to include classic cars, especially “MG’s” which he used to impress the girls walking by.

One girl in particular, Robin Chase, caught his eye, and she, whole-heartedly accepted his unconditional love for 45 years. “The Prince” and the “Pirate’s Daughter” shared their mutual aloha for vintage Hawaiiana and Kona, HI. Completing their Pacific Rim homes-away-from home – was the Reno Sands Casino.