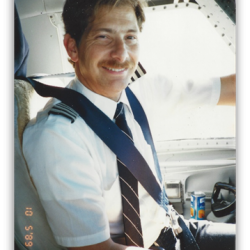 Robert “Bob” Meng of Seattle, Washington, age 66, passed away peacefully on November 16, 2019, after a hard-fought battle with cancer. Bob’s family and friends were by his side throughout his illness and when he passed.

Bob was born in Seattle in 1952 and raised in Normandy Park. After graduating from Mt. Rainier High School, his tremendous work ethic and tenacity propelled him into a colorful life, filled with adventures and unconventional paths to success.

Bob began by following his love of aviation and worked successfully to become a commercial airline captain. He loved to fly, travel and make friends around the world.

While working for the airlines he was able to follow his other passion, recreational boating. During this time, Bob realized the vital need for on-water boater education. Using his experience in airline style training, he created the first, official, On-Water Training program for boaters. Soon, his powerful and systematic approach was in high demand. Bob spent the next 30 years on the water, helping thousands of people to become more happy and relaxed boaters.

Bob and his vast knowledge will be missed, but his adventurous legacy will continue with all of those whom he inspired.

We’ll see you on the seas and in the sky Bob!

May the wind be ever at your back. Fair weather, and God speed!

Bob is preceded in death by his brother, Ron Meng, parents Godan and Florence Meng. He is survived by his sisters Karen and Lori, brothers Eric and Dennis, daughters Erica and Mindy, sons Blake and Ian, and six granddaughters

A private time of remembrance will be held by the family.

Online condolences may be left with Elemental NW

If you wish to send a donation in Bob’s name, please consider The Center For Wooden Boats https://47028.blackbaudhosting.com/47028/South-Lake-Union-Annual-Fund-Contribution