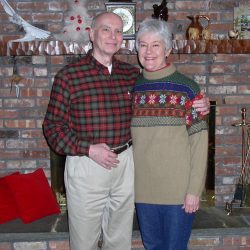 Susan was born in St. Louis, Missouri on December 28, 1936 to Walter Coryell and Margaret (Gordon) Coryell. She moved to Southern California as a young girl and attended the University of California at Los Angeles, where she graduated at the top of her class with a Bachelor’s degree in accounting. After completing her studies, Susan flew to Germany with two friends, bought a black 1959 Volkswagen Bug there which she named Gus, and spent the next several months exploring Europe. She then shipped the car back to the U.S. and returned to work for Price Waterhouse in Southern California as an auditor, eventually becoming a Certified Public Accountant. She met her future husband, Harry Larson, at Price Waterhouse; the couple married and had two children, Douglas (b. 1965) and Bruce (b. 1967). Harry also had two young children from a previous marriage, Linda and Robert (Bob), who Susan regarded as her own.

The family moved to Northern New Jersey in 1969 and Susan welcomed Harry’s mother into their new home to live with the family. After her children finished elementary school, Susan returned to work as an accountant for Lehn & Fink (now part of Bayer); for part of her time there she was the comptroller for Givenchy.

Susan was an avid gardener, a runner, and a skilled quilter, developing her own beautiful designs to tell a story with each creation. She enjoyed taking her children, and eventually her grandchildren, on outings to museums and theater productions in New York City and the surrounding area. She also enjoyed being her own financial analyst, researching stock market trends for the fun and challenge of it.

Following Harry’s passing in 2007, Susan eventually met and began a friendly correspondence with Frank Arrison of Newtown, PA. Susan lived at Frank’s farmhouse in Newtown for five years, where she learned to love animals and enjoyed time outdoors.  Following Frank’s passing in 2019, Susan went to Seattle to be near her son Bruce and his family.

Susan will be dearly missed by her family:

Linda, her four children, and their children

Robert (Bob), his wife Marcy, their three daughters and their children

Doug, his wife Kelly and their three sons

Bruce, his wife Sheri, and their daughter

We are grateful for the life she lived and the examples she set for each of us along the way. The family will have a private memorial service in California to honor Susan. We would like to thank Aegis Living and Evergreen Hospice for their support in caring for Susan in her final days. In lieu of flowers, donations may be made to the wonderful caregivers at EvergreenHealth Foundation: https://www.evergreenhealthfoundation.com/ways-to-give/donate/