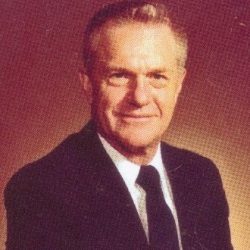 Harold Fremont “Ole” Olsen passed away peacefully at Horizon House in Seattle on Friday April 12th 2019. He was tired after a long fulfilling life and just plain wore out. Let’s see why:

Born in Davenport, Washington on the family 320 acre wheat farm to Oscar Edgar and Dorothy Jane Sprowls Olsen in October, 1920. There was a water pump out in the yard, and an outhouse, the same for the little house in town.  And a sawdust ice house. It was hard work on the farm but that just started the roots of strong family ties.  Ole grew up doing chores on the farm but had hay fever which led to jobs in town as a butcher, delivering newspapers and working at the gas station. But he noticed that the best occupation during the depression times seemed to be the town lawyer.  That left an impression.  Ole also liked fishing and bird hunting with his father. So the stage was set, well almost.

On a bright, sunny day in September 1929, a Ford Trimotor circled Davenport, wagging its wings a couple times and set down on a stubble field. What could be more exciting for two nine-year-old-boys? Ole and his friend Butch jumped on their bikes to go see.  The sign read “Sightseeing rides a penny a pound.” Back to town they peddled to raid their piggy banks.  The permission form requiring a parent’s signature presented no problem. Ole signed Butch’s mother’s name to his, and Butch signed Ole’s mother’s name to the other form.  The ride surpassed all expectations-friends and neighbors waving as the plane swooped overhead, dogs running and barking, horses and cows in the nearby fields galloping off as the airplane flew by.  Little did Ole know how prescient this event would be for his later life and career.

A three sport letterman at Davenport High school, Ole had the honor of naming the team the Gorillas, a name that remains today.  And good grades afforded the opportunity to attend Washington State College, the first in his family to do so. Again a standout student he worked his way through school using skills as a butcher, renting tuxedos, and ROTC to get the job done.  And there also met Jeanne Luella Rounds, daughter of the College architect Fred G. Rounds.  They were to remain together for the next 70 years until Jeanne passed away in 2008. 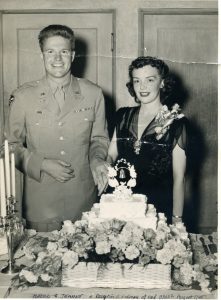 But a little thing called WWII got in the way and Ole became a second-lieutenant in the Army Air Corp. (remember the Trimotor?)  Of note, his second time up in an airplane, a Douglas A-20 bomber, ended in an Oklahoma cornfield….  Ole served three years in North Africa and Italy working his way up to major, and included a Silver Star and Soldiers Medal.  After the war he was able to attend Harvard Law School (that education and good grades part and the G.I. bill) and then returned to the Northwest where he landed at the firm of Holman & Sprague, now Perkins Coie. There he had the opportunity to join the jet age as Boeing was a primary client that Ole helped “bet the farm” on jet powered passenger planes, the 707, 727, 737, and 747.  Someone had to figure out how to write the contracts to get the maker and user of airplanes to work together and Ole was that clever lawyer. He traveled extensively, ostensibly to work for Boeing and the world’s airlines that were hungry for the new planes, but really to golf, fish, ski, and travel with his much beloved wife Jeanne. He travels again with her now.

But all work and no play is no fun, so Ole made sure that his talents were used to lead his sons in the Boy Scouts where Eric and Ron both made Eagle, a testament to his leadership in the troop.  He became a horse trader to support Maggie’s herd of hunter jumpers, and fooled many a trout with a fly rod in places as far away as Canada, Alaska, New Zealand, and Russia.  The family also embraced skiing, with trips to Colorado, Idaho, Whistler, Timberline Lodge, and many happy weeks at the Silver Skis at Crystal Mt.  Ole used his legal training to help create the Barker Ranch, a wetlands preservation project back in Eastern Washington that just so happens to also have a few ducks flying around. Ole was a Life Sponsor of Ducks Unlimited. And since we are on four letter words (fish, duck, hunt, and skis) let’s not forget golf.  Ole was an avid golfer locally and on vacations broad including Scotland and New Zealand where Ole and Jeanne were “snowbirds” for a number of years.  He was a long time member of the Seattle Golf Club, including a term as President.

Ole loved all his family, wife, children, grandchildren, great grandchildren, siblings, nieces, nephews, and relatives from his ancestral homelands of Norway and Bohemia.  He created many family trust accounts to be used for education. For it was education that brought the farm boy from Davenport WA through WSC where he met Jeanne, ROTC that gave him a leg up during WWII, got him into Harvard Law school, and led to a highly successful career with the Perkins firm.  Ole served on the boards of the Museum of Flight (Trustee, President and Chairman), Northwest Hospital Foundation, Exotic Metals Forming Company, and The Washington State University Foundation (Trustee and Chairman). If he wasn’t the President he was the Chair of many committees dedicated to expanding those institutions most often with a goal of increasing accessibility and education.

Ole was predeceased by first wife Jeanne Rounds; and by his second wife Shirley Holland a long time WSC friend; his sisters, Bea, Margie, and Dottie; and by his brother Bud.  Ole is survived by his three children, Eric (Vicki), Ron (Masami) and Maggie (Kelly) as well as four grandchildren, and seven great-grandchildren. There are also many other relatives who benefitted under Ole’s wings of guidance and education funding. He is sorely missed by them all. 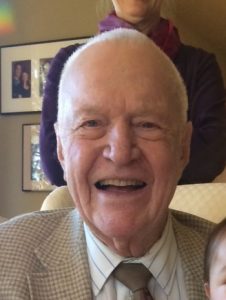 Ole wrote a book, some Funny things Happened to this Farm Boy on the Way into the Jet Age which we hope many of you have had an opportunity to read.  If not let us know and you can borrow a copy.  It is an inspiration to see how one of the Greatest Generation did it the hard way, with grace, honor, civility and love.

We want to thank his support team including his caregivers (especially Janet and Amy), Evergreen Hospice, Horizon House Supported Living staff and Dr. Paul Kassab who all made the final process easier.

A celebration and memorial of Ole’s life will be held at the Seattle Golf Club on June 9th from Noon to 3 pm.

In lieu of flowers a please consider a donation to his beloved WSU or the Museum of Flight.