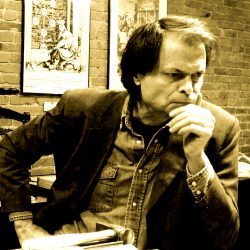 Subscription
John “Joel” Radcliffe, was born in Goldendale, Washington on April 6, 1953. Joel grew up with his parents John and Amaryllis and his three siblings, Kathy, James and Jerry on the family ranch and farm. Joel discovered his strong work ethic at an early age from helping on the ranch and farm which would pave the way for his dedication to the art he shared.

Joel was a true artisan until his last breath. Joel dedicated his whole life to the craft of bookbinding, and continued to work until his body could no longer support his efforts. Joel peacefully passed away with dignity in his Pioneer Square residence, by the side of his loving wife Mie on the dawn of June 22, 2020.

Joel traveled across the US and Canada as a young man and later lived briefly in Tunisia. He studied cartography, historical boot and shoe making, blade smithing and most notably, bookbinding. His career as a bookbinder began in 1975, and after obtaining a mastery certificate from a master from Canada. In 1991, Joel established his own bindery, Ars Obscura Bookbinding & Restoration Co.

In addition to providing quality restoration works and one of a kind custom bindings to the public, he published his own titles for Ars Obscura Press, and bound books for esoteric publishers such as Acorn Press, Trident Books, Ouroboros Press, Clavis Editions and Viatorium Press.

Joel’s passion was his craft and attention to the fine details. Bookbinding was his pride and joy. He rarely left his workbench, when he did take a rare absence, he’d enjoy occasional travels with his wife to Oregon, and Mexico which he adored and would fondly share stories of their time in Mexico City and the Yucatan. Joel loved visiting his nephew, Ethan and his family in White Salmon, WA. Joel had an avid interest in unexplained mysteries, cryptozoology and megalithic cultures. Joel would illuminate when he would chat with friends at his workbench about the latest Bigfoot sightings over a can of Heineken and the Rolling Stones.

Joel was a man of distinction. His signature style, a tweed jacket and jeans with a black beret and a pair of civil war replica boots that he made from scratch, had never been changed for the last 30 years. Joel was a stately denizen of Pioneer Square since 1997 when he relocated his bindery to the neighborhood. Joel is dearly missed by his wife and friends and will be missed by everyone in the community.

Joel is survived by his wife Mie who continues to operate Ars Obscura Bookbinding & Restoration Co.

In lieu of flowers, letters of condolences can be mailed to:

A viewing for family and friends will be held July 8, 3-4pm. If you would like to attend the visitation please contact ritualrevival@gmail.com for more information.

A memorial will be held at a future date to be determined.